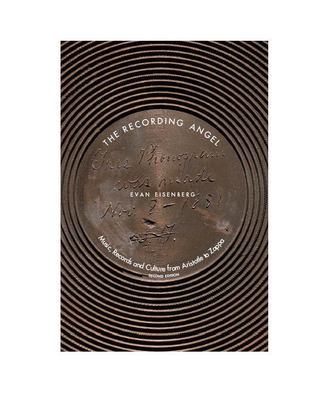 "One of the most original series of insights into music, recorded music and the recording process to have come along since the invention of recording itself, more than a century ago."
—John Rockwell, New York Times

"'The Recording Angel' is a classic work of cultural criticism. It is also
that rare thing -- an intellectually probing book full of ideas
('phonography' in particular has influenced my own thinking about music) but written in a engaging, witty style that never feels scholarly or academic."
—Simon Reynolds
Author of Rip It Up And Start Again

“A marvelous book, unlike any other.”
—Gary Giddins, author of Weather Bird

"'The Recording Angel' was one of the most original and provocative books about music published in the 1980s. All these years later, it is still thought-provoking and it has proven remarkably prescient. It should be essential reading for anybody interested in recording as an art in itself."
— Tim Page

Praise for the first edition

“Eisenberg’s scholarly and entertaining book is the joyous celebration of a mystery … the magic liberation of music from the strictures of time and space.”
—New York Times

First published in 1987 and now considered a classic, The Recording Angel charts the ways in which the phonograph and its cousins transformed our culture. Music became a thing — an object to be fetished and hoarded. The social ritual of music collapsed. Oral tradition became global (and century-spanning) rather than local. Phonography — the making of music on record — emerged as an art in its own right, as different from live music as film is different from theater.

In a new afterword, the author shows how digital technology, file trading, and other recent developments are accelerating — or reversing — these trends. He then offers vivid sketches (like the profiles that punctuate the original text, but entirely fictional) of people inhabiting alternative futures of music — parallel worlds that may, in fact, intersect.

Influential and provocative (and widely translated), The Recording Angel is essential reading for anyone who cares about the effect recording has had — and will have — on our experience of music.